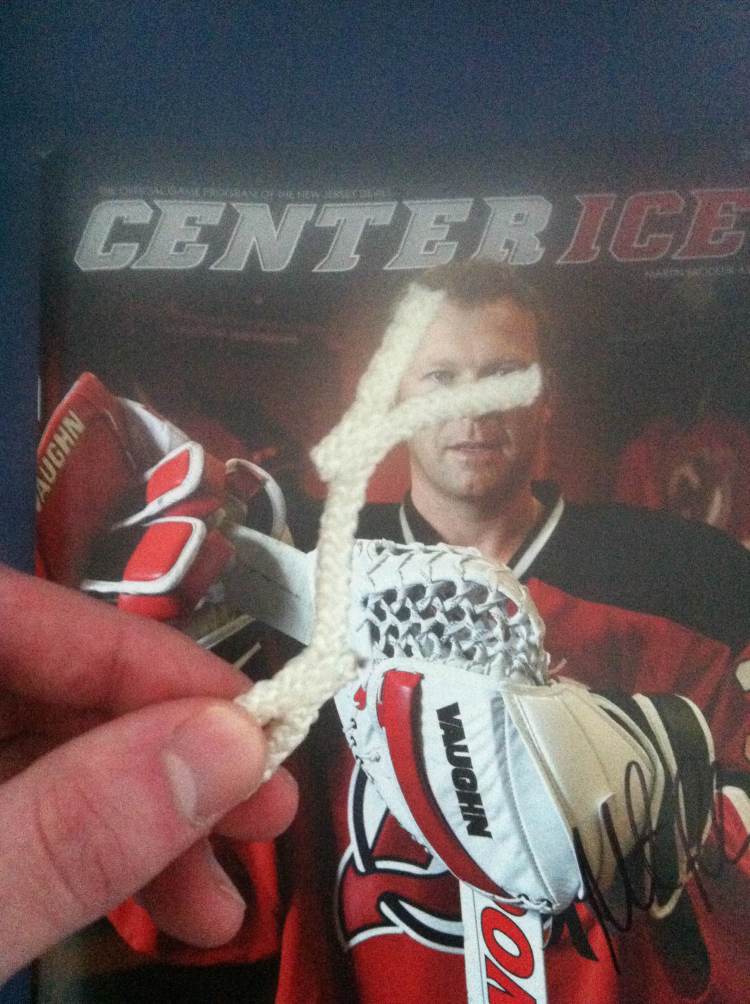 On Sunday April 13th, 2014 I witnessed something that quite frankly I thought I would never see. The New Jersey Devils had a matinée game vs. the Boston Bruins at the Prudential Center in what appeared to potentially be Martin Brodeur’s last game as a Devil.

The game itself, including the postgame, were filled with many mixed emotions that any Devils fan could only appreciate. Even more unexpected to me, was what I had encountered on this past gorgeous Easter Sunday.

The “Mar-ty” and, “Marty’s better!” notorious roars originated in East Rutherford, off of the New Jersey Turnpike exit 16w, and migrated over to the beautiful Prudential Center in Newark, “The Rock.” Those were the only waves of chants players could hear on April 13th at The Rock.

They were same chants from Continental Airlines Arena that had fans gasping in laughter and disbelief after Marty would make a cartwheel glove save. They were the same chants that made an unforgettable smile and laugh visible from underneath Marty’s classic white caged mask. They were the same chants that rung like church bells throughout The Rock; that had you and the person sitting next to you smiling, more than excited, and high fiving each other saying, “Did you see that? WOW, what a save…”

As soon as the both teams took the ice, what was technically a meaningless game on paper, had the feeling of a playoff hockey game atmosphere. Everyone in the building, whether it was someone’s first NHL game or not, knew the significance of the game that day.  The Devils end of the ice for warm ups was full of more fans than usual. Fan-made signs were placed against the glass in both corners for Marty. All eyes were on him. It was his game and day to take. 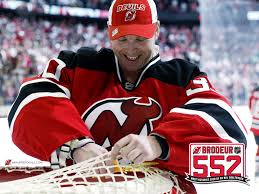 Although, the Bruins didn’t dress most of theirtop players it was still a typical and vintage Devils victory.

The Devils outshot the opposing B’s, played defensively sound, and won a tight one goal game 3-2. I think the obvious way to see Brodeur leave would be, “To go out on top,” with a championship. But, from a hockey fan’s point of view, this potential farewell and appreciation for Marty was fine by me.

The “Mar-ty” chants started from the second our country’s national anthem ended, and never died down. They grew louder and stronger as the game went on, and as the Devils beat up on the Bruins, playing out of pure respect and emotion for the greatest goaltender of all time.

Once the game had ended is when reality kicked in for me, “That damn, this very well could be it for Marty…”

The ear piercing horn sounded to end the game, and Devils players excitedly hopped over the boards to eagerly congratulate Marty on potentially his last game in a Devils uniform. Every fan immediately rose and began his more than well-deserved ovation. Not a single soul left their seat to exit the arena, not even the Bruins fans.

My seats were located 13 rows up, to the right side, behind the Bruins net. You could see Deb Kauffmen step on the ice across the way by the Devils bench with the MSG camera crew; and then on the jumbo-tron you saw Patrick Elias approach Marty and whisper something in his ear. You knew and could feel something had to be up, right?

Marty was slow to move away from center ice, where the whole team formed a line against the boards where their bench was. He was now alone at center ice where the crowd was louder than ever with mixed chants. Chants of, “Mar-ty,” and others just screaming and cheering at the top of their lungs just to make noise out of true emotions.

Marty slowly skated around the center ice circle, with his mask lifted up, turning to every direction of the crowd. He stared out into the sea of fans dressed in red and waved with a sentimental look on his face. It was a look of gratitude, thanks, and appreciation for the years of support the fans had given him.

He heartily held his stick up in the air for seconds at a time, and slowly skated off the ice where his teammates followed him in single line formation. But, that wasn’t the last of ovations, or Marty.

He was then announced as the game’s first star, and was interviewed on the ice by Kauffmen, for the whole arena to hear. He expressed nothing but love for the organization and the fans, and how New Jersey would always be, “Home.” The crowd’s noise did die down though when the big question was asked if he had made up his mind about returning for another season.

He left the impression that he would like to continue to play, and it would be sad if this were to be his last game as a Devil. But, the fans still showed support and love for their beloved future Hall of Famer. You could tell, the fans understood and could feel for where Marty was coming from. I then began to reflect…

Memories quickly flashed through my head. Being that I grew up and became a Devils fan at such a young age, Brodeur was my first true idol in sports. Everything about him I admired, and I wanted to be just like him. It’s funny, I played goalie for two years of my hockey career because of him.

The first time I ever saw him play was in the mid 90’s, and I just thought he was beyond awesome. I loved the way he carried himself, how the fans and team embraced him, and how he appreciated the fans just as much as they appreciated him.

He was born to be a New Jersey Devil. His style was classic; with his designed goalie mask that should be in the Hall of fame one day because it’s that cool and original looking, and he always had the coolest design schemes for his equipment too. I wanted all his equipment that he wore simply because it was Marty. Funny little memories of playing floor hockey against my dad and my friends appeared in my head. Even in something as silly and fun like floor hockey I would mimic Brodeur.

The same cartwheel glove saves he used to make, I performed in my living room against my buddies. And then would imitate commentator Doc Emerick’s voice shouting, “Oh! What a save by Brodeur!” My buddies and I would then look at each other with that same look the fans would give after Marty actually made that save that started up the, “Mar-ty” chants. Other little memories appeared like making a “glove” save and adding some flair to it, and excitingly asking my dad, “Dad! Dad! Did you see that Brodeur save I just had on Zach?”

Memories of getting my first Brodeur jersey as a birthday present appeared in my thoughts too. Unwrapping a gift not knowing what to expect, and holding up a red and black Devils jersey with the white letters spelling out, “Brodeur” and number 30 on the back, made by KOHO, felt like yesterday. I had a smile on that day that made my face even redder than that jersey itself.

Unexpectedly, I experienced that same smile, beat red feeling, and flashback of memories this past Easter.

I spent Easter Sunday at a golf course with my father’s side of the family. I walked into the pro shop there where I had an unexpected conversation with a fellow Devils fan. Let’s just say he is friendly with Martin Brodeur, which also struck up more to talk about.

We exchanged stories with each other, our knowledge, and opinions on certain subjects of the sport. Knowing me, I spoke my mind and asked as many questions as I possibly could to pick his brain. He could tell right away I was a genuine Devils fan, and a big supporter of Marty. He was more than friendly and had a high hockey IQ, a really down to Earth guy.

As I was eating and as the night went on I thought to myself, “Wow what are the chances I would have had such a great conversation about the Devils and Marty today?” Especially since it was one week after I may have just witnessed his last game.

It was much unexpected to say at the very least. He definitely inspired me even more to write this blog I had been planning in my head for a couple of weeks now. Yet, he gave me further inspiration as I was just about leave.

As we were getting ready to leave he said, “Hey Kyle, I’ve got something for you in the pro shop.” I nodded my head and proceeded to follow him into the shop. Honestly, I had zero clues on what to expect. We were up at the counter, where the register was, when he put a piece of white twine from a hockey net in front of me which rested on a signed Brodeur Devils game-night program.

Before I could ask what it was he looked at me and smiled and said, “That’s a piece of the net from when Brodeur won 552, when he got the all-time wins record.” My face was in shock at first and beat red. I smiled, plus laughed in disbelief and explained that I couldn’t accept this rare piece of history. He insisted that I did, “I want you to have this, really,” he said. I thanked him and was still in shock and taken back by all of it.

Brodeur’s 552nd win gave him the most wins of all time for any NHL goaltender. Ironically enough I had been at that game which was back in the spring of 2009. They beat the Chicago Blackhawks 3-2 that night. It was a night that had the Prudential Center filled with the same emotions and chants from the April 13th game.

After that game there was an ovation and ceremony for Marty as well. One of the things he did during the post-game ceremony was cut the net down from which he defended for two periods. It was similar to when a team in the NCAA March Madness tournament cuts down the netting from the hoop after advancing to the final four.

It was a sentimental ceremony that was pretty damn cool to witness in person. Now, I have a piece of that net, that not too many people possess. It’s a piece from more hockey twine that will one day be present in the Hockey Hall of Fame in Toronto, Canada.- A dream come true…

Having the honor and opportunity to grow up and watch Martin Brodeur play for my favorite sports team is something that will stay true to me for the rest of my life. I was fortunate enough to be at his 552nd win in 2009, and then recently for his potential final game as a Devil.

Those unique atmospheres from those games only happen once in a blue moon in sports.

I hope Marty stays with the Devils…

One thought on “An Unexpected Gift”