After dipping consistently for seven years it seemed like there was no solution that would help me stop. Especially after attempting to quit countless times I would still find myself with the need to throw a lip in.

Every person who smokes or chews knows the struggle of what it takes to quit nicotine. I tried chewing gum, seeds, and even hoped switching to tobacco pouches would contributes towards quitting. Nothing worked, and pouches immediately became my new “go-to” habit.

Comments and warnings from my dentists and peers went in one ear and out the other. Lectures from my parents over the years didn’t help the cause either. It wasn’t like I didn’t respect what anyone had to say, it was just a matter of finding an actual solution and new habit that would help me stop.

As I mentioned in my testimony “I Dipped” some self reflection helped towards quitting, but then there was surprisingly something else that officially put my pinches to rest.

A mother never stops caring for a son, specifically her only son. After years of getting on my back and annoying me if I had gave up on dipping – my mother finally found the solution for me, Jake’s Mint Chew. 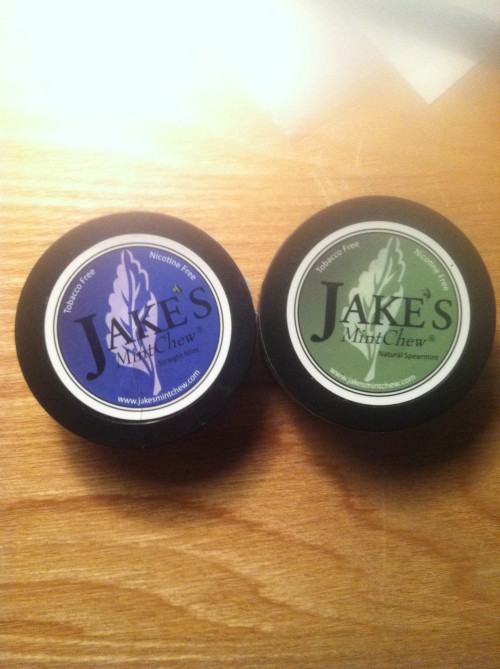 She had came across an article online about how players from one of my favorite baseball teams, the Boston Red Sox, were starting to use a nicotine and tobacco-free chew instead of dip. She sent me the link for the article, which also lead me to Jake’s Mint Chew page.

After reading the article and numerous testimonies from other tobacco users I could easily relate.

Smokers looking to quit should be extremely jealous of those trying to quit chew, because Jake’s is as close as it can possibly get to the real thing. Jake’s appearance looks just like long cut. It’s color is a little off from the real stuff, but it gets the gist across with its “dirt brown” look.

The texture is very similar as well. Although, it appears like normal long cut, while grabbing a pinch and going to pack it in your lip it feels like fine cut. At first it does have a bit of a “messy and soft” feel, but as soon as you pack it down with your lip it stays put just like a normal pinch.

I’ll be honest, it was a little discouraging at first because it was so soft, messy, and was going all over the place. I felt like a “rookie” all over again trying to pack his first lip, ha. But, I promise you get over it real fast.

Once your lip is packed with Jake’s it feels like the “real deal.” They offer 10 flavors including my favorites of mint and spearmint. The flavors were the clincher for me with Jake’s.

The flavor is obviously not like a real lip, but it’s as close as it gets, and brings a different and satisfying flavor to your mouth. It’s like having a lip in with a more refreshing feel.

Besides the fact that Jake’s Chew is an obvious and safer alternative it’s also a healthy option. With Jake’s you can swallow those flavored juices you normally spit onto the ground or into a water bottle. Jake’s is all natural and is made from real mint leaves.

The juices and chemicals from dip are harmful to various parts of your body, including your stomach. The juices from Jake’s Chew are natural and benefit your digestive system. A lip of Jake’s even makes your breath smell better – you can’t go wrong there.

1.) Throw out everything – Get rid of any tins you have laying around your house or car. If you can’t come to terms doing that – have someone else do it for you.

2.) Saying you’re going to quit is one thing, but having it embedded in your mind is a whole new ball game. Look at it as a friendly challenge, and hey you really can’t lose either, because you can only gain from quitting.

It may sound contradicting but the less you think about it the better too. With dip on your mind, you’re going to get suckered into getting your hands on a lip and that attitude of, “One more lip won’t hurt…”

3.) Invest in at least 10 tins of Jake’s. I say 10 because you won’t run out fast enough to where you’ll revert back to buying the real tins again. After you’ve done that place Jake’s tins everywhere you would normally stash your real ones. Your desk drawer, glove compartment of your car, book bag, etc. That way when you perhaps go to reach for a real lip – Jake’s is already there. This creates and contributes towards a new and better habit.

And, if you’re really worried about if “your boys” will judge and make fun of you, I get it, but just think outside the box…rip the label off a Jake’s tin. No one will be able to tell the difference when you go to pack it then. Jake’s tins are exactly like the old black-plastic Grizzly tins. If anything it looks like you’re doing a more “hardcore” dip.

4.) It’s not as easy as “One, two three…” Coming out and repeatedly saying out loud that you quit and why you decided to helps too. It’s all apart of the process, it’s like practicing with anything else in life.

There will be plenty of times you’re going to have that major urge for a lip, whether it’s after having a rough day, or watching your buddies all around you do it. That’s when carrying around Jake’s with you, like you would normally with a dip tin, comes through in the clutch.

After going three to four weeks of being dip free I really had no urge to dip again. I once read that if you can go 20 days without something – you’ll no longer need that thing in your life. Jake’s made that process possible though.

Packing a lip of Jake’s entails the same steps of packing a lip. It’s the same habit and routine of carrying around your puck shaped tin, packing it with that notorious slapping noise every dipper knows, and grabbing a pinch to put in your lip.

Jake’s quickly becomes that new habit that passes by time during that long car ride,before you step onto the ice, or are on the baseball diamond.

Hey, perhaps one day the MLB would consider teaming up and promoting Jake’s. It’s a rare sight to see, but that would seem like a “win-win” situation for both sides.