As a “jersey collector” for professional sports teams, thinking about what jersey I should look into getting next is on my mind quite often.

Last March for my 23rd birthday I wanted one gift, and one gift only.

Over the last couple of years I’ve slowly had some visions and thoughts about getting some-sort of jersey in honor of Coach Derek Percy. I could never quite put my finger on what exactly I wanted to do, or assemble…

I would have ideas like, do I get “Percy” and his number “5” on the back of one of his favorite team’s jerseys, whether it be hockey or football etc?

Thoughts would come and pass as time went on, and then about a month before my birthday it suddenly hit me. I knew exactly what I wanted.

Whenever you go to hockey games, or ever get the chance to, you’ll notice there’s always one person walking around wearing a custom made jersey that has some type of meaning to it.

For example, a New Jersey Devils jersey with the number “95” on its back with “00” and “03” on its right and left sleeves, and “Champs” stitched onto the back nameplate in affiliation to the organization’s Cup winning years.

Recalling seeing jersey’s like “Champs” with three different numbers had me thinking that not only could I honor Coach Derek with a custom tribute, but I could have two other brothers of mine represented on this jersey I had been envisioning.

The Chicago Blackhawks played in one of the few outdoor Stadium Series games last season for the NHL. Each team wore a custom made alternate-esc-jersey for their outdoor game. The Blackhawks just so happened to wear a modified version of a jersey that resembled their old black uniforms; a black Blackhawks jersey I wore playing alongside Rich Grande and Mike Weltner while playing under Coach Derek.

The Chicago Blackhawks Stadium Series Jersey was fresh, and had a certain “SWAGGER” to it that made it great. I knew all three of the guys would have loved it.

I had made tributes towards the guys before in the past, like writing their numbers on my game sticks and skates, or getting numbers outlined on the back of my head during a haircut. Yet, this idea I had felt different to me… it was something felt previously before I started working on “The Little Thing5” story.

It was a gut and jittery feeling of, “Hey, I have to do this, and I deeply want to.”

It was like the guys were slowly hinting and pointing out all the signs for me. So, I listened and took in the little things that lead to some creativity and a tribute that brought joy to my face.

When my family asked what I wanted for my birthday I listened to my heart and could feel it in the bottom of my gut, like I had just made the cut at a professional tryout. The tribute I had been seeking was to get the Chicago Blackhawks Stadium Series Jersey with Derek’s number “5” on the back with his last name, “Percy,” stitched onto the nameplate.

Then, on the sleeves I would get Grande’s hockey number “71” added on one side and Weltz’s “12” on the other. Numbers they wore while we were teammates.

I thought it be appropriate to have Coach’s name and number on the back symbolizing that we’re a part of #TeamDerekPercy. He was one of our inspirational leaders and idols, especially for myself. We were all his boys…

I added the captain’s letter “C” to represent myself. My last season playing with Weltz and playing under Derek I was named team captain, so that represents my spot on the jersey, being alongside my brothers again.

Thanks to coolhockey.com I was able to have the jersey customized exactly how I wanted it.

A week after the order was placed I knew the day had come where the jersey should have been delivered to my place. After class I drove back – nervous and excited. I was nervous because I would be bummed if it hadn’t arrived yet, or if something had gone wrong for some reason.

I got to the house in the late afternoon to find that the jersey had not arrived. I was more than disappointed. I just didn’t have the patience to wait any longer, and it should have arrived hours ago.

I wistfully headed back into my car to leave. I started my car, and was about to drive away. Something kicked into my head though…I decided I’d wait five more minutes to see if just maybe the UPS truck would magically appear with my jersey.

What’d you know, as I sat in silence I heard the noise of a truck to my left. A UPS truck was coming down the street -fate played in my favor – and I immediately jumped out of my car.

As the brown UPS truck pulled in front of my house I ran onto the front lawn with an adrenaline rush going through me. While the delivery man was in the back of his truck my legs naturally took me two steps forward towards the truck, but I hesitated and stopped. 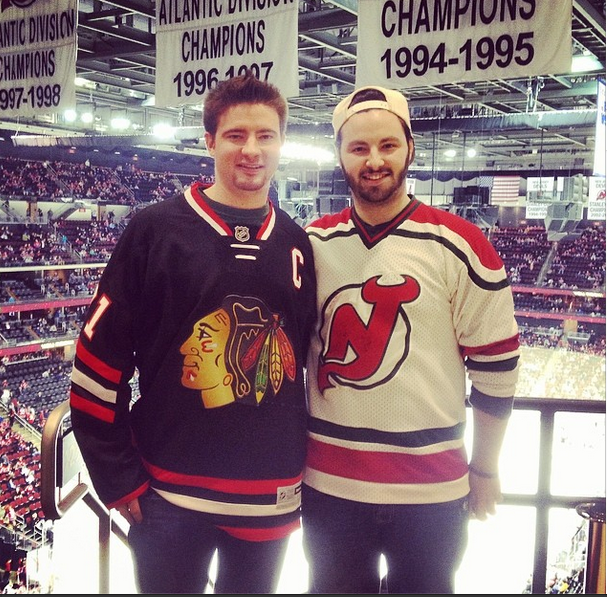 I would have probably freaked the delivery man out if I just ran up and met him to take this package before he could even get out of the truck, so I awkwardly stood there in the middle of the lawn, eyeing the package the UPS man was carrying towards me like a hawk eyeing down it’s prey.

The UPS man looked around a little confused at first with an expression on his face saying, “What the hell is this kid doing in the middle of the lawn not moving and staring me down.”

I grabbed the package right out of his hands as he smiled and shrugged his shoulders and walked away.

After I opened up the gift I held up the jersey to admire it – It was gorgeous. It’s chrome logo shined in the light, and the white numbers outlined in a sharp red gleamed even brighter against the midnight black-based jersey.

It’s proven to be a “lucky jersey” ever since. If I go to a Devils game now with some old teammates of mine, I’ll typically wear it. Most people around me compliment it, instead of questioning why I’m wearing a Blackhawks jersey to a Devils game.

The jersey had brought wins to Devils, and when I wore it a few weeks ago to a game I randomly got offered a seat upgrade to have access to the “Platinum Club” – a private and hidden club in the Prudential Center. I’d say that’s pretty lucky.

Last NHL post-season when the Chicago Blackhawks fell down in a series against the Los Angeles Kings three games to none, I decided I’d break out the lucky jersey for the Hawks’ sake. I wore the jersey for the next two games, and the Hawks won. For game six I wasn’t around, but I had my mother hold onto it while she watched the game – the hawks won…

This birthday present was awesome for a number of reasons, but most importantly it was created out of pure love and appreciation for a special group of guys.

It’s a reminder our boys are always with us, they’re always watching over us, and luck is on our side.