I was driving home on a freezing October night around midnight when I saw one of the most remarkable sights I’d ever seen with my own two eyes while crossing over the bridge from Long Branch into Oceanport on Shrewsberry Ave.

As soon as I crossed over the small bridge simultaneously my head slowly lifted up to my right to look up to the clear night sky, while my right hand slowly turned the volume knob to the left to lower my music.

“Whaaaaaat…” I said out loud.

Everything was now going in slow motion, and I felt like I was in some sort of dream because what I had saw didn’t seem real.

Up above in the night, soaring across the stars was a green light, a very large green ball of fire, with an even brighter green tail flying behind.

Time stood still for me.

My head and eyes shifted from looking upwards to the right to looking straight ahead again as they followed the pace of this extraordinary green light as if they were attached to it by a string.

I watched it glow and sail behind the trees in a downwards arc motion, almost as if it was outlining the Earth’s spherical shape, in the same direction I had been driving. So, as I watched it fly in front of me, it appeared as if it was crashing down to Earth, unlike a shooting star that jets quickly across a night sky and disappears.

This looked like it was honestly going to crash right onto my front lawn which was about a mile up the road.

It was so close too – like when you’re outside and your reaction to a low plane flying above is, “Wowww, that plane is low.” Even though you’ve seen a million planes fly low you’re still always taken back by it, and it can startle you a bit.

My experience and reaction was like that, except I was looking at a green ball of fire fly across the sky.

After it had disappeared, and possibly crashed into little ol’ Oceanport, I was left there driving alone in my black Mazda speechless, zoned out, wide-eyed, and in shock. I looked to my left, right, and in all my mirrors to see if anyone else was around to have witnessed this phenomenon…

Nope, no one else was around of course when I witnessed something like that. My first reaction should have been – I just saw a UFO, but it wasn’t. Of course, I had been reflecting as I always do…so I just immediately made a wish like I would have done if I had seen a shooting star.

Two minutes later I pulled into my driveway and called my friend who I had just been with to tell him what I had just experienced.

I think I hurt his ear through the phone from talking so loud out of astonishment, and probably sounded like the “fast-forward” noise from an old VHS player. He was just laughing and said, “Maybe it was a UFO haha…” He probably thought I had stopped at a bar on the way home or something, and was imagining things.

I walked inside to tell my mom in the same astonishment – she looked at me like I was crazy – great no one was going to believe me about what I had just saw.

As soon as I got inside I Tweeted about what I had just witnessed. I then searched via Twitter for results for “green shooting star.”

Results came up. Tweets were made around the same time I had constructed my Tweet entailing characteristics about seeing this “green shooting star.” 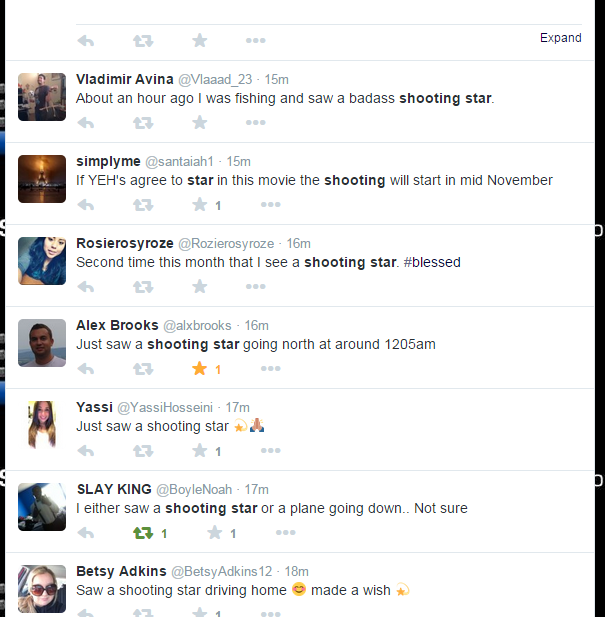 I was still in amazement at what I had seen, and so curious too. Like any other person would have done – I Googled it.

Online there are quite a few testimonies from people seeing green “fire balls” or “shooting stars.”

It was more than likely a meteor or a comet.

Or, perhaps I saw something that’s unknown, a mystery.