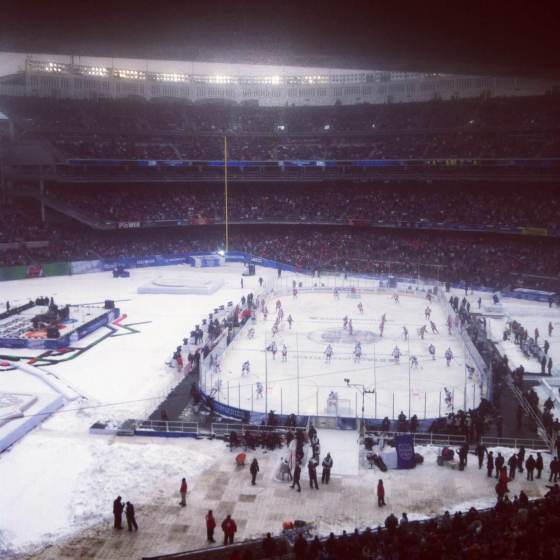 Yankee Stadium, known for being the home of the 28-time World Series Champions, the New York Yankees.

During the months of April through October, typically the Stadium is being used as a baseball venue with the white and blue Yankee pinstriped uniforms filling up the seats surrounding its baseball diamond.

The sound of the “Bleacher Creatures” chants, “Der-ek Je-ter!” clap-clap-clap-clap-clap! – Can be heard from the outfield. The popping “Crack,” of a wooden bat making contact with a 90mph fastball thrown by a pitcher is heard throughout the stadiums seats and main concourses.

One of the Yankees’ biggest sponsors, Majestic Athletic, has a huge sign seen above the outfield seats, and most would say a Yankees game at Yankee Stadium in general is a “majestic” feeling and sight.

On January 26th 2014, Yankee Stadium was majestic for other reasons; crisp and frozen reasons that is.

On that day, the sounds heard from the stadium were no longer about Derek Jeter, or a baseball bat cranking a ball out of the park.

On that day, the sounds heard were hockey fans jeering at each other, and chants for their hockey teams, “Let’s go Devils! Let’s go Rangers!”

The sounds of pucks ringing off steel iron posts plus them drilling into the side boards, and player’s skate’s cutting into the solid outdoor ice making continuous swishing noises.

Yankee Stadium had officially been transformed into a winter wonderland.

As a Devils fan, even though they had lost the game, it was the little things that had made the day so majestic.

My family and I, plus our family friend Uncle Jules, had gotten tickets to the game about seven months in advance – A classic group – Dad, Mom, Aunt Karen, and the infamous Uncle Jules – who had originally gotten me into hockey at a young age.

As we arrived to the Stadium it was nothing short of a classic scene. The temperature was in the 20’s, thousands of fans walking around in either blue or red jerseys and heavy jackets, and the three banners hung high outside the Stadium for the Devils, Islanders, and Rangers.

We entered the Stadium on the earlier side to check things out and see what the outdoor rink setup looked like on Yankee Stadium’s field.

The rink stretched across from the third baseline to the first baseline, so it was parallel to the center field fence.

Everything was perfect. The atmosphere with the mix of the rowdy Rangers fans and the Devils diehard fans – yet both sides still appreciated what was taking place – a once and a lifetime experience.

As we walked outside to our seats, which were 20 rows up on down first baseline towards the right field corner; to the left behind Martin Brodeur’s net. I felt like I was in the world largest and most beautiful cathedral.

I could see my breath every time I spoke or laughed, like I just exhaled out a ton of smoke. The freezing cold weather – I had no animosity towards even with my toes and face going numb I loved it; it made the experience bitter sweet.

There I was – looking at this outdoor rink in Yankee Stadium at the age of 22 standing next to the guy who had gotten me into the sport of hockey at the age of five…laughing and hugging each other in acknowledgement to how cool the sight truly was in the freezing cold.

In that moment it seemed like yesterday I was in Uncle Jules’s driveway just learning how to skate and hold a hockey stick, learning the history of the Devils franchise, and energetically asking him to watch me make a move and shoot while I threw my arms up in the air like I was Patrick Elias.

We stood next to each other laughing while sipping on Jameson and toasting beers together, appreciating the sport and taking in everything else the moment had to offer.

What made it even better was the fact that yes – it began to snow once the game began. It was a picture perfect script to an outdoor hockey game in New York.

The Devils scored the first goal of the game, and who better than Patrick Elias to be the guy.

After he scored he threw his arms up in the air just like I did in Uncle Jules’s driveway back in the day, like a kid again.

At the same time the five of us all celebrated like the New York Giants had just scored the first touchdown in the Super Bowl; joyous hugs and smiles, and of course Jules and I took a swig of Jameson for good luck.

The fact that it was outside at Yankee Stadium…to the cold weather and snow coming down on the players, and fans that stood up from their seats for the entire game…

The Rangers wearing their new pure white “chrome-logoed” Stadium Series jerseys, and the devils wearing their vintage red and green jerseys from the 1980’s…

The outdoors in the freezing cold was where hockey all began. It’s where most hockey players first started skating, on the pond outside.

Rangers – Devils at Yankee Stadium was a majestic sight and experience.