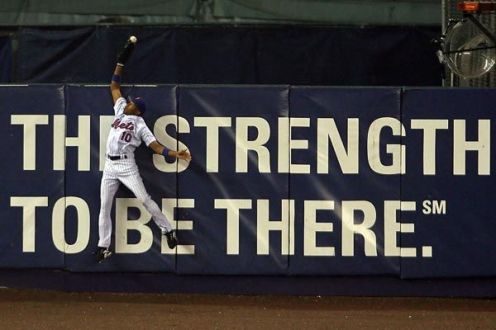 I recently found myself in the middle of an interesting conversation about sports and fanhood; why and how do people become fans of certain teams?

Is it because of the area we live in; individual players we find ourselves rooting for; an organization’s colors and branded logo; etc.

I found myself trying to explain why and how exactly I became a New York Mets fan. My first reaction that it was simply natural for me and overtime I gravitated towards the Mets, but there were a few other reasons. Yes, it was the ‘little things‘ about the Mets that made them “my team.”

Most children are brought up either playing or watching sports whether they like it or not. It could have been through a town rec. soccer or baseball league, or that their families were die hard sport’s fans and crazy about a team like the New York Yankees.

As a young child I was always a hockey fan and the New Jersey Devils were my team – hockey was life at the age of eight or nine; even back then I could probably tell you the last time Martin Brodeur sneezed. I was also “into baseball” around those years, but never really paid much attention to the professional games like I did for hockey.

Born and raised on the Jersey Shore it seemed like everyone around me was a Yankees fan; so, I “rooted” for the Yankees too early on. All my family and friends did, so I had to…right?

I found myself not being able to watch the Yankees on TV, and personally found their games boring. I felt out of place in a way while wearing a Yankees hat, or the notorious pinned stripe jersey. Even at that age, in a way, I felt like a phony. I really didn’t care for them, but I just kind of went “with the flow” with my surroundings.

I had rooted for the Mets, Red Sox, Cardinals, Devils Rays etc because I liked their logos and what not(keep in my mind I’m still a kid) but then one night it happened; I officially became a New York Mets fan.

It was a beautiful summer night on June 30th in 2000 when I finally took interest in watching a professional baseball game. I stumbled across the Mets playing the Atlanta Braves. I tuned in during the middle of the game, and I believe the score was 7-1 Atlanta. So, why would I keep watching with a score like that?

For some reason I was automatically attracted to the game and its’ atmosphere. I liked the way Shea Stadium just glowed under its’ lights during the night. The stadium was easily sold out, which had this unique and electrifying atmosphere than most sporting event’s I had seen before.

The Mets began rallying a comeback in the bottom of the 8th inning and Shea’s passionate fan’s got even more electric; I became more sucked into the game, and found myself feeling like I had been a die-hard Mets fan forever.

Mike Piazza got to the plate with two men on and nailed a line drive down the line and out of the park. Shea was rocking; a packed house full of people jumping up and down and hugging each other like they had just won the World Series. Piazza and the team just brought a different energy and excitement to the table than other teams like the Yankees did at the time.

Piazza truly was a rock star. You could tell right away it was “his team”, and he came through in the clutch that night. His teammates greeted him like they were kids again celebrating a home run at the local park when he arrived back at home plate. The rest of the Mets in the dugout couldn’t wait to greet him as they looked like the fans in Shea’s colorful seats who were going wild. The Mets embraced the moment and the fans, just as the Shea crowd did for them.

It was confirmed – Mike Piazza was one of my new favorite athletes, and I officially loved the Mets.

As time went on there were the other little things about the Mets I admired. For example, I loved the fact that they were black jerseys. The black uniforms weren’t this “traditional look”…they were cool and looked good with the orange and blue. They seemed like underdogs or “The rebels of New York” regardless of how good of year they were having then.

Players other than Piazza I loved to watch were Robin Ventura, Elgardo Alfonzo, Timo Perez, Todd Zeile, Al Leiter, John Franco, and Benny Agbayani. They were all exciting and fun to root for. I found myself getting more and more into baseball mainly because of them. I would pretend to be them during wiffle ball games in the backyard, as I would do my impersonation of either broadcaster’s Gary Thorne, Fran Healy, or Howie Rose when a home run was hit with my buddies.

A year later the Mets were the first team in all of professional sports to resume play after September 11th had happened. Once again Piazza and the Mets rose to the occasion, but so did the Shea crowd like always. Another come from behind win and dramatic home run hit by Piazza that night gave me goosebumps and an overwhelming feeling of emotion I simply could not forget. I stood in shock with my hands on my head in my living room, and my mouth was so dry I couldn’t even make out words.

That game and home run gave not only New York hope, but an entire nation. Sport’s proved to be a “Healing” that night for our country that was in need of something special and positive to happen; a reason to jump, cheer, smile, and forget for just a few minutes what tragedy had recently taken place in New York.

The Mets also honored the Firefighter’s and Policemen/women of New York that night by wearing “FDNY” or “NYPD” hats. I thought that was so awesome and genuine. I even got myself an “FDNY” hat after that night. In fact, the hats seemed to be good luck in a way for a struggling Mets team that year. They wore the hats for the next few weeks and were playing exciting baseball again giving Mets fans hope as well as their city.

As the years went on more exciting players were brought in like Pedro Martinez, Carlos Beltran, Carlos Delgado, Cliff Floyd, David Wright, Jose Reyes, Endy Chavez, etc. A player like Pedro had some fun season’s with the team, and there never seemed to be a dull moment with him. More importantly he loved being a Met.

Floyd, well there was one summer where he was “Mr. Clutch.” It seemed like every other night he was hitting either a walk off homer or single getting Shea going crazy again like that night on June 30th in 2000.

The Mets have struggled over recent years, but one thing is for certain – when the Mets are winning – nothing is more exciting.

I have a good feeling about the Mets this season, and as crazy as it sounds I can’t wait to see what the Mets have in store for the 2015 season…

That’s how I became a Mets fan.