“Mr. McKenna,” the specialist doctor said sternly, as he sat there observing my MRI. He shook his head from side to side and looked up at me. “I’m telling you, that you ABSOLUTELY cannot play any form of contact sports with this injured shoulder.”

It was the summer of 2013. I had dislocated my left shoulder twice and torn my rotator cuff multiple times by this point. Both while playing ice hockey.

“I would strongly advise for you get surgery to repair the severe damage I’m seeing here, or else your shoulder and tear will just continue to get worse, and pop out of place,” he continued.

I had heard this advice multiple times, like a broken record. Somehow I couldn’t grasp the significance of this injury.

Although I had already lost most of my passion to play the sport, which was my “first true love” – hockey, and the shoulder had painfully limited me to do so as well; I looked at the doctor and replied back speaking straight from the heart and athletic instinct…

“Well, I’m not a fan of getting surgery. I really don’t want to do that all. And, this is the end of the road for me, my hockey playing days. So, I’d like to just try and play and have this be my final season.”

The doctor was quick to respond as he shrugged, “Well, if that’s what you want to do, you can. You can hope for the best, but you realize it’s going to happen again at some point, right?”

I left the specialist’s office that day laughing; not laughing because I thought what the doctor told me was funny and I was some immature punky-jock, but out of pure disbelief. I can remember driving home shaking my head and still laughing in pure denial.

I felt like my luck had quickly faded with this “chip on my shoulder” that I was dealing with, and had been turned upside down like a sand timer. My time was ticking, and ticking fast.

I had this concept embedded in my mind that this was going to be my final “go” at playing competitive hockey, especially as the team’s captain; I felt obligated to play, and to try to help out in anyway I could. I had this envision of “going out” on my own terms and the way I wanted to. But, the reality was I wasn’t helping out the team, or myself at all.

I had a “C” stitched on my Monmouth University jerseys as the team’s leader, but I was far from “the captain” for my final games with the team. I wasn’t the same person, player or leader. I wasn’t and simply couldn’t play the same way I normally would have, either.

Going into the corner to battle for a loose puck or receiving a pass as a winger on the boards immediately became an obstacle and a, “Here we go again,” mentality. All it was going to take was one hit really; one hit and that was it – I would end up back in the ER, in atrocious pain and what’s a miserable experience.

I felt bad for the new or younger guys on the team. They were looking to me to “make a play” or for answers in a time when we needed them during a game. For the first time in years I didn’t have it in me to answer, play or lead. I was quiet in the locker room and not mentally motivated, nor inspired to play anymore. 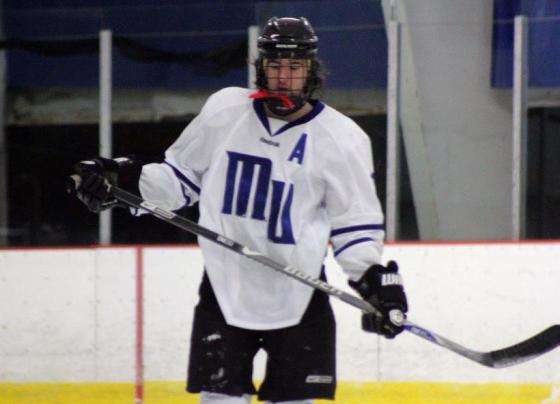 How could I be? I couldn’t be the same player or the player I wanted to be, especially not knowing if this was going to be my last game or shift, I had lost hockey friends, and on top of that we just didn’t have the team to win games.

I can certainly apologize to my teammates for not being the same leader or player, and shouldn’t have played to begin with. But, I also didn’t feel a ton of support either, which is a shitty feeling that didn’t make matters any better.

Something I would get asked constantly from a lot of people, “Mick, why don’t you just get the surgery so you can play next year?”

I appreciated the guys or anyone else asking me out of support to play, but the reality was – Why in the world would I get serious shoulder surgery and go through painful and months worth of recovery (On top of still being a full time student) just to be play D-2 club hockey? What would I honestly get out of that?

I played in about half the games of the first semester and by mid December I found myself back in the ER for the second time in exactly a year, December 16th. I went into the ER already knowing more on how to handle the dislocation process than the nurses or doctors did. It was as if I had foreseen the future, or was repeating history all over again.

That was it. I was DONE, shot. The shoulder injury and other past unfortunate occurrences had taken a huge mental toll on myself, and while there’s more to tell from that experience…

I got my priorities straight.

More to life than playing sports

Too often I see athletes (and parents pressuring their kids) to over chase, “The dream.”

By “Dream” I mean trying to play a sport, like hockey, and pursuing to go places, higher competitive levels of play. While I fully support everyone to “do what you love and follow your dreams,” and believe that “hockey is a life style;” there comes a point in time where reality (needs to) kicks in, and there’s more to life than playing a sport.

What do I mean by that?

You can only play a sport for so long before it comes to that point where you age out of a Youth, High School, Collegiate or Junior Hockey levels etc; where there’s no more opportunity to play.

I played junior hockey for two years, while taking courses at a community college, but decided to enroll at Monmouth and “skip” out on my final year of eligibility to playJjuniors – I’m glad I did…

I’ve seen it A LOT, especially among hockey players, where kids put off getting an education, don’t put in enough effort towards their degree, or towards a career in favor of playing sport; and then once they’re done playing it becomes, “Well, now what?”

Now, you’re in your 20’s with little education completed, or none at all. “Playing a sport” competitively realistically isn’t an option anymore, or making that Semi Professional team is slim to none and financially speaking not worth it; because “playing a sport” doesn’t get you from point A to point B when it comes to finding a career; it doesn’t land you that internship or job; and it certainly isn’t a “stand out” on your resume.

Not being able to play hockey anymore was the best and worst thing that ever happened to me.

After I could no longer play my respective sport I focused and was more involved with school, plus my major. New doors and opportunities opened that I never even imagined would have before I stopped playing.

While I must say hockey taught me a lot about life and groomed who I was as a person, which I am more than grateful for; taking advantage of the new free time I had to go after other aspirations was the icing on the cake.

Even though it’s not Thursday yet. #tbt It was a start of more great things to come @Connor_J_Hughes pic.twitter.com/b9iMi5bep5

I had recently heard an editor from a magazine speak and what stood out the most was when she said, “You need priorities…I loved lacrosse. Absolutely LOVED playing lacrosse, and I had played for years. It was the toughest thing to do to stop playing…but it was worth it, it was worth it. Because playing lacrosse wasn’t going to get me anywhere…”

BOOM. When I heard that fireworks went off in my head. I wanted to give her a standing ovation right then and there and scream out “Thank you!” Playing a sport isn’t going to get you a job, bring in income, and quite frankly can hold you back from accomplishments/skills you never even knew you had that will put you in a good position for your future.

Playing a sport, in college, is time consuming during both the week and on weekends. While it probably left her with amazing friendships, memories, more pictures and awards to add to her wall, like hockey did for me; she would have never gotten her editorial position and be happy (post college) if she had continued to play lacrosse in college, more than likely.

What was continuing playing a sport at that point in life going to get her, or myself, honestly?

Get an education; any type of education. You don’t need a degree from an Ivy League Institution. Just get that “piece of paper.” And, get involved in school. Discover new passions. Pursue new dreams, and things you never had the time to experience, because of playing a sport.

Now, keep in my mind this piece is my perspective and shared experiences – everyone’s different – if you think you can do both to your fullest potential, I still respect your decision.

But, if you’re on the fence about continuing to play, suffered from an injury, and can relate even the littlest bit to my point – take in everything I had to say. Don’t be like me and drag it out. Stop, stop playing.

You’re not “quitting,” either. Don’t let anyone poison your mind with that term – You’re simply doing what’s best for you, and not falling into a whole I like to call “purgatory,” a standstill.

I was once guilty of this at a time with a chip on my shoulder. So are plenty of other athletes and their parents with their kids…

4 comments for “Chip On My Shoulder, Priorities”